I am a bit late to the DevOps party; so, excuse me if this question is repetitive.

Most introductory articles on DevOps definitely cover the following:

My questions are as follows:

I would no say Jenkins is just a CI server, It has evolved and become a CI/CD tool rather than a Just CI tool.

Other open source tools like Netflix Spinnaker (for AWS) has great traceability features.

Now with the latest Jenkins Pipeline as code feature, you can code your entire development and deployment pipeline in a Jenkins configuration file called Jenkinsfile.

The level of traceability you need has to be modeled by you in every stage of a pipeline. I could be tools like packer, terform or ansible that would be integrated at the backend to achieve your CI/CD need.

Another great plugin you could look at it the jenkins bluocean plugin.. It has a great UI with real-time tracking of each pipeline stages. An example view is shown below. 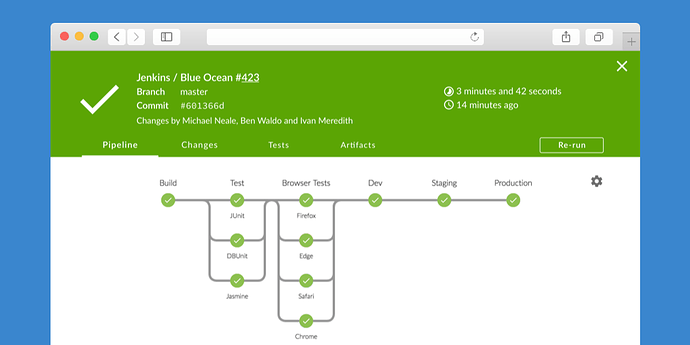 Wow Thanks for the information Buddy.